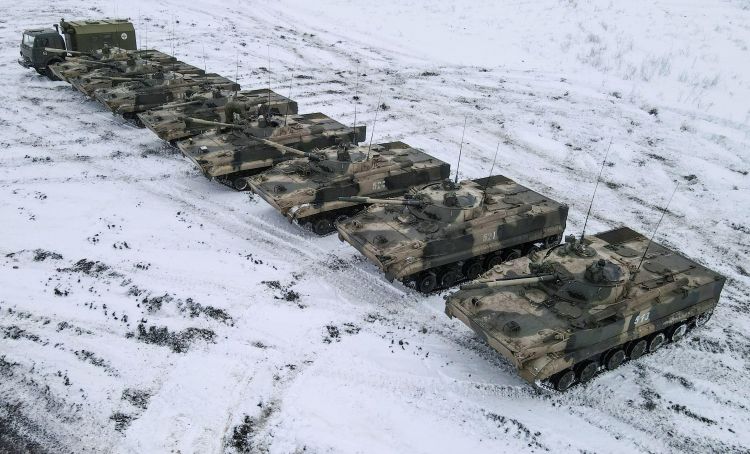 The United Kingdom and the United States accuse Russia of continuing its military buildup near Ukraine.

Despite Moscow’s claims that it has pulled back some of its forces and weapons, the UK and US have accused Russia of continuing its military build-up along the Ukraine border.

The United States claims that Russia has sent 7,000 more troops to the border zone, while Britain’s military intelligence chief claims that additional armoured vehicles, helicopters, and a field hospital have been spotted in the area.

« Contrary to their claims, Russia continues to build up military capabilities near Ukraine, » said Lieutenant General Sir Jim Hockenhull, the UK’s Chief of Defence Intelligence, in a statement late Wednesday.

« Additional armoured vehicles, helicopters, and a field hospital have been seen moving towards Ukraine’s borders. Russia possesses the military might necessary to invade Ukraine. »

Meanwhile, a senior White House official, speaking on the condition of anonymity, said that, in addition to the 7,000 additional troops, Russians have made a significant increase in false claims, including reports of unmarked graves of civilians allegedly killed by Ukrainian armed forces.

NATO also claims to have seen no signs of Russia retreating.

In response to the tensions, Britain is doubling its troop presence in Estonia, with additional personnel and equipment being sent to the Baltic nation, as well as other European deployments.

Despite massing an estimated 130,000 troops along the border, Moscow has repeatedly denied any intention of attacking Ukraine.

Russia’s UN deputy ambassador dismissed claims made by Western politicians about the crisis as « fantasies » once more.

« This is a ridiculous situation; our Western colleagues have fanned hysteria, even hype, for several weeks, » Dmitry Polyanskiy told ITV’s Peston programme.

« They persuaded each other and the rest of the world that Russia was about to invade, even giving dates. As a result, it occurred in their minds, in their heads. »

Watch: On Tuesday, Russia released footage purporting to show Russian troops and equipment leaving the Ukraine border area; however, there are questions about whether this is true.

Britain and its allies must not be « lulled into a false sense of security » by Moscow’s claims that it is beginning to withdraw its forces, according to Foreign Secretary Liz Truss, who will visit Ukraine and Poland this week in a renewed show of support for allies.

She wrote in the Daily Telegraph that Russia’s military buildup « shows no signs of slowing down. »

Ms Truss will say in a speech in Kyiv, Ukraine’s capital, that the « path of diplomacy » for Russia to resolve the tensions remains open.